1946, Holywell, a Victorian asylum outside London. Within this closed community, Narcisa, the cook, has a life of routine and discipline; but a letter out of her past begins to threaten both her livelihood and her peace of mind.

The Jeweller’s Skin is a story of exile, trauma and recovery, spanning half a century and from Kosovo to London.

She slipped out through the gap and pulled the door closed again behind her.

It was the long curve of the corridor. She had forgotten where the door would take her, the night world of the ward was so compelling, the sense of strangeness and risk filling each moment. Only two or three of the lights were on, the other brackets dull like broken branches. The opposite wall was blank, no doors, no windows, just the bulge towards her of the dado-rail and the brown wallpaper below it. On her side, on either side of her were doors, exactly like the one she was leaning against, panelled, with white china handles and finger-plates. And behind each of these doors there is a ward, with white bedframes lined up, and grey blankets; and upstairs above us exactly the same again; and beyond that door at the end of the corridor the men’s wards, their different smells, what they say in their sleep.

Someone will come. I’ll be punished in the morning.

She walked barefoot down the centre of the corridor, her hands stretched out a little towards the walls, till she came to an outside door, which was swaying, open.

in Watch and Wait, Cybermouse Multimedia 2014 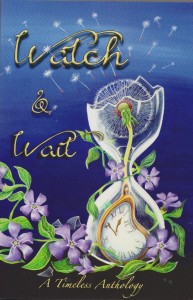 The man was thin and not very tall, with dark straight hair, a bit greasy, and long hands. I noticed his hands because he kept fidgeting. I could see straight away he was unhappy. I don’t say that to boast; a child could have told you. He looked down at the floor, and at the wall behind the card-tables, anywhere there was no-one looking back. He was wearing a coat, a shapeless sort of raincoat or light overcoat and, given the weather, that too was strange.